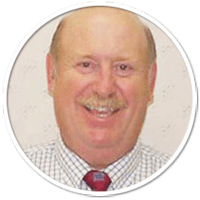 Dr. Reslock graduated from Pacific University College of Optometry in 1970. Since that time he has practiced in Myrtle Point, Coquille, Bandon and Coos Bay. He has served on the Oregon Optometric Association Board of Directors, was president in 1982 and has received awards as "Young Optometrist of the Year" in 1975, "President's Award" in 1982 and "Optometrist of the Year" in 1988. He served many years on the Oregon Board of Optometry. Additionally, he was one of the founders of American Eye Instruments Inc., a company which provides support for optometrists and hospitals across rural America. He has participated for many years in a Rotary Club Eye Mission to Ecuador.

Dr. Reslock has been very active in his community. He was president of the Myrtle Point Chamber of Commerce. The Myrtle Point education Association named Dr. Reslock "Education Citizen of the Year" in 1980. He coached SWOYA basketball for ten years. He was a volunteer Varsity golf coach for 14 years. At St. James Lutheran church, he has served as President, Elder and Sunday School Teacher. Pacific University awarded the "Alumni Distinguished Service Award" to Dr. Reslock in 1999 for distinguished and unselfish service to humanity through the profession of optometry.